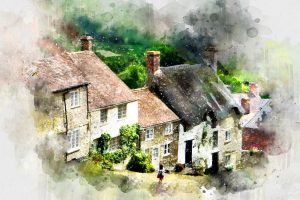 In my previous blog post talking specifically on the Types of English Teas (https://housesofwindsor.com/types-of-english-tea/), I went into historical accounts regarding English Breakfast. It started as a tea leaf scraps blend of various black teas that vendors needed to sell off. Over time, it was purposely created, and no longer from scraps. Each company that has its own blend of English Tea is quite secretive about their exact recipe. Thus, each company’s English Breakfast tea has its own unique taste. What they do have in common is that English Breakfast tea is usually some combination of Ceylon, Assam, Kenyan, and other black tea leaves.

So, how did Irish Breakfast tea come onto the scene?

The Irish tea culture started in the 1800s when tea was imported from English merchants. This Irish tea was generally of cheaper quality, so they added milk, sometimes as much as 1/3 of the cup, to cover up the taste. This, of course, meant that Irish tea had to be brewed stronger than its English counterpart, a custom which still endures today. In the 1960s, Ireland’s tea companies finally cut out the middleman and started buying their tea straight from the source. Assam tea from India, a very strong, robust tea with a high tannin level, was blended with the lighter-tasting Ceylon from Sri Lanka, giving us the invigorating tea that the rest of the world now knows as Irish Breakfast. (source: https://www.enjoy-irish-culture.com/irish-tea-culture.html)

Before we get too far into the comparison between English Breakfast & Irish Breakfast teas, it will be quite helpful to know just a smidge about Assam tea vs. Ceylon tea. So here are a few basics- Assam and Ceylon are both black teas. Like most types of tea, they are named after the location where those tea leaves are grown. Assam is from Assam, India. Assam tea is usually described as full bodied and strong with a malty flavour / flavor. (Full bodied means that tea is rich and complex). Ceylon tea is from Sri Lanka, which formerly named Ceylon during British Rule (1815-1972). Despite the regional nuances, a classic Ceylon flavour / flavor is generally thought to be bold, full, and brisk. It has medium-to-full tannins and some notes of citrus, chocolate, or spice.

The main point is that Assam is known to be a bolder tea than Ceylon. Remembering this will come in handy as we continue.

Irish Breakfast tea is also a blend of several black teas, most often a combination of Ceylon and Assam teas. Some of the most notable Irish Breakfast tea brands are heavily weighted towards Assam. It has a very robust taste and is a little reddish in colour / color. The Irish Breakfast tea blend has no standard formula for its manufacture. However, most blends share common traits that collectively define “Irish Breakfast” as opposed to British (English) tea blends. The base of the Irish tea blend is a strong black Assam tea from India that is well known for its dark colour / color, strong flavour / flavor, and malty aroma. The Assam is usually blended with one other, softer tea to bring out different flavours / flavors and to support the Assam. These additional teas are usually sourced from Kenya with a popular choice being Kenyan Broken Pekoe. The proportion of Assam tea to the ancillary leaves is what gives Irish Breakfast tea its defining flavour / flavor. The strength of the tea blend not only comes from the type of tea leaves used in the preparation, but also from the processing of the leaves before packaging. Irish Breakfast tea tends to be made with leaves that have been broken, meaning leaves that have been dried and then lightly crushed before packaging. This process allows the tea to steep more rapidly and release more flavour / flavor per leaf than an unbroken leaf.

When comparing caffeine levels, Irish Breakfast tea typically contains around 40mg of caffeine per 6oz cup. To put that in perspective, a regular 6 oz cup black coffee has between 79-139mg of caffeine. English Breakfast tea contains about 31.5 mg of caffeine per 6oz cup. Thus, Irish Breakfast does have the higher caffeine level of the two. Speaking of caffeine in tea, I learned a fun fact while researching. Have you ever noticed when you get to the bottom of your tea tin, that there is a bit of tea dust leftover? Turns out, there is more caffeine in that bit. Unbroken tea leaves will release less caffeine and offer lighter flavour / flavor with subtle notes, while broken leaf or “fannings” and dust give a strong and robust cup. A cup of tea made with tea dust may have 1-2 times more caffeine than the one made with unbroken leaves. So, when flavour / flavor is less important than strength, tea dust may give a better energy boost. However, it will rarely beat the flavour / flavor and quality of loose leaf tea. (Source: https://simplelooseleaf.com/blog/black-tea/irish-vs-english-breakfast-tea/)

How do you drink them?